Interactive resources you can assign in your digital classroom from TpT.
Learn about Easel
TOOLS 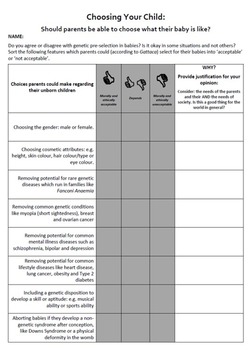 These days the issues discussed in film Gattaca (1997) are back in the news. Current debates regarding whether couples should be able to choose the gender of their children (which is currently illegal in Australia and many other countries, but is legal in the United States) and controversies regarding Westerners seeking surrogates in Thailand and India made Gattaca a very topical text for my Senior Literature students.

I developed this activity as a 'After Viewing' task. Students completed it independently before the class discussed and debated their answers. The task posits what choices parents should be allowed to make regarding their unborn children, such as gender, mental illnesses, physical illnesses. As the Baby Gammy controversy was in the news at the time I widened the discussion to consider whether it is moral or ethical to abort fetuses with syndromes such as Down's. My students were highly engaged and quite passionate about their ideas, which led into several excellent responses to the themes and ideas of the film.

Included here is the worksheet, a few discussion questions, and a list of links to videos/fact sheets on Pre-Selection Genetic Diagnosis and news articles regarding real life PSD / Gender Selection cases.

Both original DOCX and a PDF file are included.

DECD Employee? Visit my blog for a treat: duffystirling.wordpress.com


This work is licensed under a Creative Commons Attribution-NonCommercial-ShareAlike 4.0 International License.
Total Pages
3 pages
Answer Key
N/A
Teaching Duration
2 hours
Report this Resource to TpT
Reported resources will be reviewed by our team. Report this resource to let us know if this resource violates TpT’s content guidelines.

Are you getting the free resources, updates, and special offers we send out every week in our teacher newsletter?